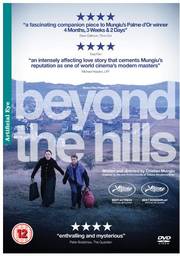 It's foreign cinema day, well actually every day can be, but we digress. Artificial Eye have announced the release of the Romanian drama Beyond the Hills for 10th June on DVD and Blu-ray.

This is based on a real life tragedy that unfolded in a small religious community in Romania, and was awarded both the Best Actress and Best Screenplay awards at Cannes 2012.

With a runtime of 152 minutes, extras will include an interview with the director and a trailer. The recommended retail price will be £15.99 for the standard definition and £19.99 for the HD version.

Two friends who grew up together in an orphanage are reunited after years apart. One has taken orders while the other wants them to both relocate to a new life in Germany.

However, their relationship and sexuality gradually tears apart the tight-knit fabric of the sect, resulting in a terrifying act that would send a shockwave through the church.