Article
Halo 4: Forward Unto Dawn is out to buy now on DVD and Blu-ray

Spartacus: War of the Damned ends the saga on DVD and Blu-ray this April 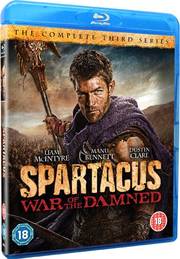 What started out as a gory cartoon cheap imitation of a movie called 300, and after a few episodes began it's journey towards being one of the best new TV series for years, is finally drawing to a close.

With just one more episode to air in the US, Starz period action drama Spartacus: War of the Damned is coming to both DVD and Blu-ray on 29th April, courtesy of Anchor Bay Entertainment.

Starring Liam McIntyre, Manu Bennett, Peter Mensah, Dustin Clare and Anna Hutchinson, the series is produced by Steven DeKnight, Rob Tapert, Josh Donen and Sam Raimi. The recommended retail price will be £39.99 for the standard definition and £49.99 for the HD version.

Joining the above is The Spartacus Collection, which contains the final season along with Blood and Sand, Gods of the Arena and Vengeance, priced at a mere £69.99 for the DVD and £84.99 for the Blu-ray.

Gaius Claudius Glaber is dead. Many months have passed since his defeat, and the rebel army, led by Spartacus and his generals Crixus, Gannicus and Agron, continue to amass victories over Rome. With the rebel numbers swelling to thousands of freed slaves, Spartacus is more determined than ever to bring down the entire Roman Republic.

Following Ashur’s death, Naevia and Crixus fight as one. Together, the rebels engage in one bloody skirmish after another and prepare for the inevitable: a full out war with Rome.

The Roman Senate turns to Marcus Crassus, a wealthy, strategic politician, for aid. He respects his opponent and refuses to make the same mistakes Glaber and his predecessors have.

With a young and fiercely competitive Julius Caesar as an ally, Crassus is determined to crush Spartacus and his rebellion. The epic conclusion of a legendary journey, Spartacus: War of the Damned will unleash a battle unlike anything ever seen before.