Blu-ray
Deadlier Than the Male

What's all this then? Scotland Yard: Complete Series on DVD in January 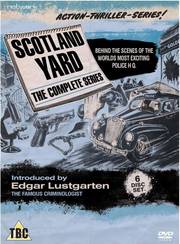 A series of films that wasn't on TV? What the?? Ah, real life based crime thrillers for the cinema, that explains everything! Network Distributing have announced the release of Scotland Yard: The Complete Series on DVD for 14th January.

This set of half-hour thrillers was based on real-life cases from the London Metropolitan Police’s head quarters. It ran in cinemas from the early 1950s for over decade.

Narrated by renowned criminologist Edgar Lustgarten, it was filmed at the Merton Park Studios, where Lustgarten presents each of the 39 cases, with Inspector Duggan solving each crime.

Arriving as a seven disc set, in its original full frame, the runtime for this set is around 1170 minutes worth, whilst the recommended retail price will be £59.99.