DVD
Not of This Earth: The Roger Corman Collection

Cult classic Piranha gets a Blu-ray release in January 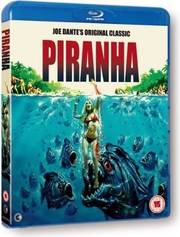 Remember when suddenly a new subject for a film did well at the box office, then a raft of imitators arrived soon after? It's what used to happen before all the uninventive studio executives realised they could just remake classic films instead.

A few years after Jaws hit the big screen, Joe Dante decided to do the inevitable and bring more killer fish to celuloid, with what some regard as a cult classic, Piranha.

Thanks to Second Sight, you'll be able to get this on Blu-ray come 28th January next year. Starring Bradford Dillman, Heather Menzies, Kevin McCarthy, Keenan Wynn, Barbara Steele and Dick Miller, it was produced by none other than Roger Corman, and written by John Sayles.

With a recommended retail price of £15.99, extras will include a commentary track with Joe Dante and producer Jon Davison, behind the scenes and making-of featurettes, out-takes, stills gallery, radio and TV spots, plus subtitles for the hard of hearing.

When two teen hikers disappear around Lost River Lake, private detective Maggie McKeown teams up with the local drunk to search for clues.

Their investigation takes them to a secret military base where they inadvertently let loose an experimental strain of mutant piranha. Now the guests at every resort downriver are on the menu.