Blu-ray
Pick Up on South Street 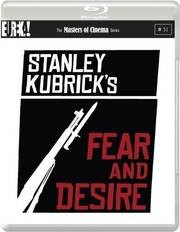 Oh Eureka Entertainment and your dedication to quality cinema, how we love you so. Next up from them on 28th January next year is the debut feature film from the legendary Stanley Kubrick, his war drama Fear and Desire.

Nearly impossible to see in the UK for several decades, you will soon be able to own this on both DVD and Blu-ray, complete with a new HD restoration by The Library of Congress, presented in 1080p on the latter. Extras will include Kubrick's early shorts Day of the Fight, Flying Padre and The Seafarers, and a video introduction from film scholar Bill Krohn.

There are optional SDH subtitles for the hard of hearing included, and also a booklet with new and exclusive essays on the film and the early shorts by Kubrick scholar, professor, and film critic James Naremore.

Kubrick's debut feature tells the story of a war waged (in the present? in the future?) between two forces. In the midst of the conflict, a plane carrying four soldiers crashes behind enemy lines.

From here out, it is kill or be killed: a female hostage is taken on account of being a potential informer; an enemy general and his aide are discovered during a scouting mission.

What lies in store for this ragtag group of killers, between their perilous landing in the forest, and the final raft-float downstream, all this constitutes the tale of Kubrick's precocious entry into feature filmmaking.