Article
HD & Satellite on the GO with Hauppauge!

StreamEez is an affordable, simple to use, easy to install HD video
streamer that enables any organisation to broadcast live.

Hauppauge Digital Inc. (NASDAQ: HAUP) has announced the release of StreamEez, a high definition video streamer designed for organisations that want a simple to use, high quality video streamer to broadcast live events over the Internet. StreamEez was designed to serve as a powerful tool for any organisation with live streaming needs. Typical applications could include live streaming over the Internet for organisations sponsoring political events such as town hall meetings, church groups wanting to broadcast religious services and other groups that need a high quality live streaming solution. 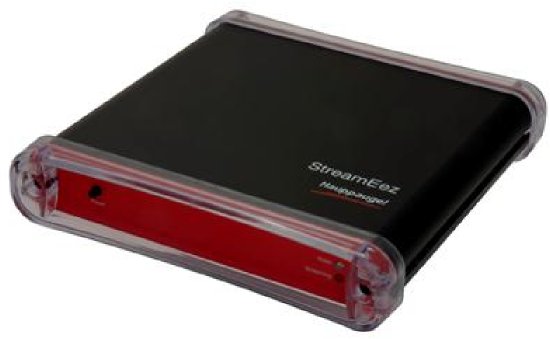 The StreamEez box connects to an HD video camera using either HDMI or Component Video, compresses the camera’s video using a built-in high quality H.264 encoder into a form that is compatible with many common streaming video sites such as USTREAM and Justin.tv. StreamEez then connects to a laptop computer (that is equipped with the Hauppauge StreamEez control application) via USB, making a connection to the streaming Internet website for live broadcast.

StreamEez is based on the same high quality video encoders that were developed for Hauppauge’s popular line of HD video recorders, Colossus and HD PVR. StreamEez requires a small laptop computer to act as the video server, an HD video camera that has HDMI or Component Video output, the SteamEez device plus an Internet connection and an account with a streaming video site. All encoding and formatting of the high definition video signal is done inside StreamEez, making the video transmission the highest quality possible.

Since most organisations streaming live events store the video equipment between broadcasts, StreamEez is designed to make set up and removal fast and easy. The StreamEez device is in a rugged housing and connects to the laptop PC via a USB cable. And because it is based on well proven hardware encoding technology, the best possible video stream is created with minimal bit rates, which delivers a superior end-user experience.

StreamEez is compatible with several popular video streaming sites and uses standard protocols such as RTMP. Pricing on the StreamEez box and Windows-based application software starts at £299.