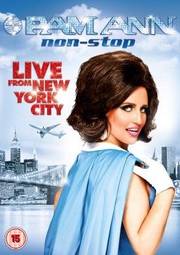 Ah, comedy, you just know that when stand-up shows start to appear on DVD this can mean one of only two things... Christmas is just around the corner, or, actually, just that one thing.

The first announcement of this ilk we've come across at least waited until this month before appearing, and it is none other than Pam Ann: Live From New York City, arriving on 12th November courtesy of Anchor Bay Entertainment.

With a run time of 91 minutes, extras will include a Safety Video, Lily A380 featurette, Pam Heart NY featurette, Come Fly With Me trailer, SkyTips with Pam Ann featurette, and an SAS Video which we suspect is probably not as much to do with the SAS as one would assume.

The recommended retail price for the DVD will be £19.99, and the certificate rating is 15.

No-one is spared from her ferocious and outrageous brand of comedy as Pam Ann takes off her pristine white gloves and delivers an unrelenting barrage of “shoot-from-the-lip” observations.