Blu-ray
The Day of the Triffids 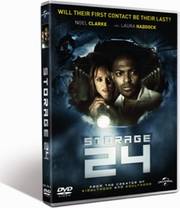 Let's kick off the week with news of a movie from Noel Clarke, who is forging a nice post-Doctor Who career as a writer, producer, occasional director, and of course actor.

He writes, produces and stars in the Universal Pictures UK release of Storage 24, out on DVD, Blu-ray and download from 29th October.

Co-starring Antonia Campbell-Hughes, Colin O'Donoghue and Laura Haddock, this is a sci-fi horror thriller, aimed at the Halloween crowd.

Extras will include over 90 minutes of bonus content, including an On Set featurette, Creature Development featurette, video blogs with the entire lead cast and A Day in the Life of Noel Clarke featurette.

London is in chaos. A military cargo plane has crashed leaving its highly classified contents strewn across the city.

Completely unaware London is in lockdown, Charlie and Shelley, accompanied by best friends Mark and Nikki, are at Storage 24 dividing up their possessions after a recent break-up.

Suddenly, the power goes off. Trapped in a dark maze of endless corridors, a mystery predator is hunting them one by one. In a place designed to keep things in, how do you get out?