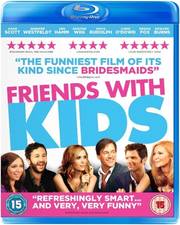 It's ensemble comedy time courtesy of Lionsgate UK, who are releasing Jennifer Westfeldt written and directed feature Friends With Kids on 12th November.

With a 15 certificate and running time of around 105 minutes, extras will include a commentary track, Making Friends with Kids featurette,
bloopers, MJ Rocks at Video Games featurette, deleted scenes and Scene 42: Anatomy of a Gag featurette.

The street prices should be around £14 for the DVD and £17 for the Blu-ray.

Jason and Julie, the last two singles in a close group of 30-somethings, observe the effect that kids have had on their friends' relationships and wonder if there's a better way. Eventually they decide to have a kid together, but date other people.

There are big laughs and unexpected emotional truths as this unconventional 'experiment' leads everyone in the group to question the nature of friendship, family and, finally, true love.