DVD
Kids on the Slope - The Complete Series

Blu-ray
Kids On The Slope Collection

MVM license Kids on the Slope

... and all my Christmases come in one go. I was unfeasibly excited by this show last year, the anime reunion of director Shinichiro Watanabe, and composer Yoko Kanno. The last time they worked together we got Cowboy Bebop. Sakamichi no Apollon, as it was when I raved fantastic about it last year is certainly no Cowboy Bebop. It’s a short, slice of life story, set in Japan of the 1960s, and it’s about jazz music. It’s the story that unfolds when a rather strait-laced and subdued pianist meets a free-wheeling and brash drummer. I watched it on Crunchyroll, and it was simultaneously the last thing I expected, and everything I hoped it would be. It’s the sort of quality animation that you hope for from Shinichiro Watanabe, yet it’s unlike anything he has made before. Last week, MVM announced that they had licensed it for UK release, and that it will hit UK homes probably around the second quarter of 2013. Go watch it on Crunchyroll now, and you too will be convinced to shell out next year. 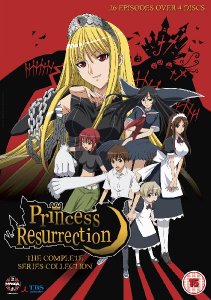 So last month I reviewed Squid Girl, then came Princess Jellyfish, and now we get Princess Resurrection: The Complete Series. I suppose next month I’ll be reviewing Jesus, the anime. Actually you may get a little déjà vu with this one, with a hapless teen male winding up with a harem of supernatural beauties. Rosario and Vampire this isn’t though, as Hiro really is the footstool of the eponymous Princess, while the vampire, werewolf, android and other females that gather don’t treat him much better. His sister is nice, but clueless, and doesn’t even realise that he’s died and been resurrected. Click on the review to read more. 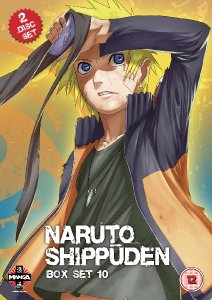 My second and final review of the week was Naruto Shippuden: Collection 10. If you don’t know what Naruto is about at this point, you may as well not bother, as we’re some 300 episodes into an epic storyline. And things really do get epic at this point of the series, as Sasuke Uchiha returns to centre stage, and he puts into motion his plans to get vengeance against his brother. It isn’t filler, it’s canon manga storyline, and it’s really great stuff. It’s so good that it makes you want to go right to the beginning and watch it all over again, to see just how the story developed to this point. Until you realise just how many episodes you really do have to watch again... And it’s Naruto’s 10th TV anniversary next month. Any chance of Naruto Kai?
It’s all Manga Entertainment this week, and Princess Resurrection: The Complete Series, and Naruto Shippuden: Collection 10 are released today. Also note that the corrected version of Panty and Stocking With Garterbelt is also released today, so if you’ve been holding out waiting for Manga to fix their flub, it’s time to place your orders.