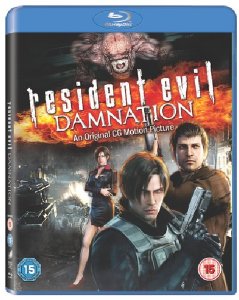 Whilst some may have been following the live action series, here we have a sequel to the CGI series which has been going it's own route, with Sony Pictures Home Entertainment and Capcom offering Resident Evil: Damnation on DVD and Blu-ray this 24th September.

Directed by Makoto Kamiya, who also directed the previous CGI film, written by Shotaro Suga and produced by Hiroyuki Kobayashi. It features the vocal talents of Matthew Mercer, Courtenay Taylor and Salli Saffioti.﻿

Both formats will include the Las Plagas: Organisms of War featurette, voice bloopers and The DNA of Damnation making-of featurette. The Blu-ray also includes Ultraviolet﻿ features, and an exclusive conceptual art gallery.

United States special agent Leon S. Kennedy sneaks into a small Eastern Europe country to verify rumors that Bio Organic Weapons (B.O.W.s) are being used in war. Right after his infiltration, the US government orders him to leave immediately. Determined to uncover the truth, Leon ignores the order and enters the battlefield to end the chain of tragedies caused by the B.O.W.s.