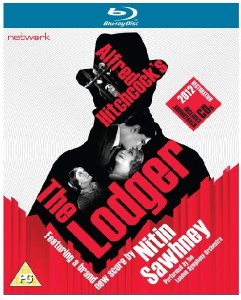 Surely everybody likes a bit of Alfred Hitchcock every now and again? I know we do, and don't call us Shirley...﻿ Groans aside, here is the news that Network Releasing﻿ are all set to release the silent classic thriller The Lodger on both DVD and Blu-ray this 24th September.

Digitally restored by the Scorsese Foundation and BFI, this comes with a brand new score to accompany it, written and composed by multi-award winning musician and composer Nitin Sawhney.

With a running time of 88 minutes, it will be in its original full frame aspect ratio and priced at £19.99 for the SD version whilst the HD comes in at £24.99.

Hitchcock’s first thriller, The Lodger: The Story of the London Fog was made in 1926 and written by Eliot Stannard. It stars matinee heartthrob Ivor Novello as a mysterious lodger suspected of being a serial-killer, the Avenger, who has a taste for young blondes.

He rents a room at Mr and Mrs Browning’s whose daughter happens to be dating the detective investigating the murders. Made for the then newly created Gainsborough Studios, The Lodger was heavily influenced by the German expressionist movement and films such as The Cabinet of Doctor Caligari and Nosferatu.

Its stylised angular shots and the heavy use of light and shadow to convey the mental states of the characters in the film draw inspiration from this school.

Talking about the new score Sawhney says, "I always hoped to follow in the footsteps of the great Hitchcock composer, Bernard Hermann. He has been one of my major heroes and influences since I was a kid. What I find amusing is that, since I am scoring a silent Hitchcock film from 1927, Bernard Hermann will now posthumously follow in my footsteps instead!"

"As a long serving judge for the Ivor Novello awards I was delighted to be scoring the one Hitchcock film that features Ivor Novello himself. A film that has all the earmarks of a genius director making his first foray into the world of suspense, this is a gift to score and I am enjoying the process more than I even imagined. I can’t wait to hear the London Symphony Orchestra play it."