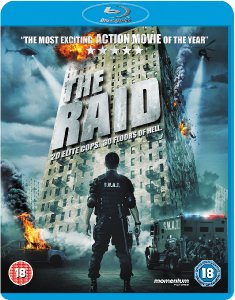 So here is a collaboration you don't expect every day, Welsh born writer and director Gareth Evans has teamed up with Indonesian martial arts sensation Iko Uwais. The result is action flick The Raid being released by Momemtum Pictures on both DVD and Blu-ray on 24th September.

With music from Mike Shinoda ﻿of Linkin Park fame, this also stars Ananda George, Ray Sahetapy and Joe Taslim﻿. Both the original language version and English dub soundtracks are included.

Extras for all versions include a director's commentary track exclusive to the UK release, Claycats: The Raid﻿ short which is essentially the film remade with stop motion clay cats, Behind the Music with Mike Shinoda and Joe Trapanese﻿ featurette, An Evening with Gareth Evans and Iko Uwais﻿ featurette and trailers.

In addition to the above, the Blu-ray will include both the original uncut and US edited versions, and video blogs. Play.com will also have an exclusive steelbook version with designs by award winning comic book artist Mark Simpson AKA Jock first appearing in Empire magazine. The recommended retail price will be £17.99 for the standard def, £19.99 for the HD version and £22.99 for the steelbook.

Deep in the heart of one of Jakarta’s most deprived slums stands an impenetrable high-rise apartment block. To most it is 30 floors of Hell to be avoided at all cost but for many of the city’s most dangerous killers and gangsters, including the area’s most notorious crime lord, it is a fortress-like safe house protecting them from the law. Even for the bravest and most experienced police officers it is considered a no-go area.

In a desperate bid to flush these violent criminals and their leader from their haven once and for all, an elite SWAT team is tasked with infiltrating the building and raiding the apartments floor by floor, taking out anyone who stands in their way.

Cloaked under the cover of pre-dawn darkness, the SWAT members make their move and enter the block not realizing that this is the easier part of the mission. Once inside, it soon becomes terrifyingly apparent that the real problem at hand is surviving long enough to be able to get out again.