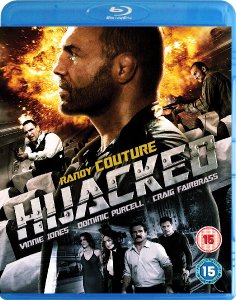 If you like your action... erm... actiony? Is that even a word? Probably not, but anyway, Anchor Bay are releasing plane based action flick Hijacked on 30th July for both DVD and Blu-ray formats.

Tough US government agent Paul Ross is at the forefront of an international operation to smash a global terrorist organisation and crime syndicate known only as The Tribe, a group notorious for obtaining its funds from the drug trade and illegal arms dealing.

When a tip-off as to the whereabouts of the Tribe's leader turns out to be a set-up that lands Ross in the middle of a bloody firefight in which he loses several of his close colleagues, he becomes ever more determined to bring down those responsible. The aftermath of the doomed mission brings Ross a vital piece of information suggesting that the Tribe's next target will be one of the world's richest industrialists, Bruce Lieb.

When the new intel proves to be reliable, Ross soon finds himself hitching a ride from Paris on Lieb's luxury jumbo jet in the company of a group of ruthless hijackers, some very rich hostages and, unexpectedly, Ross's ex-fiancee, Olivia, who has just started working as Lieb's PR assistant.

Now, for Ross, the potential $2.73 billion ransom money at stake has become a secondary issue. When the seatbelt signs go off, his primary concerns are revenge and saving the love of his life by whatever means necessary.