DVD
The Legend of Bruce Lee

DVD
Sin City 2: A Dame to Kill For

Article
Kenneth Branagh stars in Wallander: Series 3 out this July

Article
Hush out in July

Article
Pedro out in July

I Am Bruce Lee documentary hits cinemas, DVD and Blu-ray in July 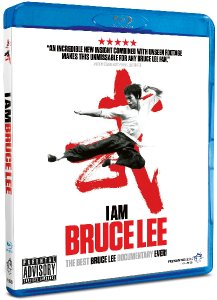 The most famous martial artist of all time, Bruce Lee, often a regular subject of film-makers, has been quiet as a topic of late, but no more. For FremantleMedia Enterprises are releasing the Network Entertainment produced documentary I Am Bruce Lee in cinemas this 20th July, and then on DVD and Blu-ray on the 23rd July.

With a runtime of 94 minutes, and a recommended retail price of £17.99 for the SD and £22.99 for the HD versions, extras will include personal films from Bruce Lee's archives, an Inspiration: Bruce Lee's Global Impact featurette, Bruce Lee in Action featurette and trailer.

Synopsis, as much as a documentary can have one, is as follows...

Despite his tragic and sudden death on 20th July 1973 at the age of 32, Bruce Lee's enormous influence on martial arts, entertainment and popular culture lives on to this day.

Utilizing rare archive footage, photos, movie clips and brand new interviews with members of his close family, as well as with numerous stars from the worlds of sport, music and acting who have been inspired by Lee's legacy, I Am Bruce Lee goes more deeply into the true story behind the legend than any ever before.

The film also examines Bruce's connections to the establishment of Mixed Martial Arts as we know them today, acknowledging that if Gene LeBell is considered the Godfather of MMA then Bruce is without doubt the modern-day Father of MMA.