Not so much the analysis as it is the roundup of announcements in the past week that were missed out on at the Expo.

The biggest news of all is that Puella Magi Madoka Magica will be released in the UK on October 22nd this year, and even more, it will be released on Blu-ray as well as DVD. Manga Entertainment are going straight to boxset for this title, and are eschewing the limited edition packaging and extras found in other territories. This does mean though that the series will be available on both formats for less than half what you would expect to pay if you import it.

For those of you who liked the booby goodness of Sekirei, Manga Entertainment also announced via Twitter that they have licensed Sekirei Pure Engagement Season 2. Also Baka & Test Season 2 has been delayed, probably to 2013 as Manga have to wait on the English dub being completed.

Once in a while, a company which isn't one of the usual suspects will take a chance and release an anime. Last year it was Cine du Monde and ICE. This year it is Terracotta Distribution, who have licensed Gyo for home distribution after showcasing it as part of their film festival. It will be released on the Terror-Cotta label, and renamed to the more descriptive Tokyo Shark Attack. Sharks with legs, what's not to love! 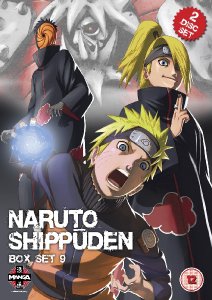 Last week had just the one anime review, so if you're in the mood for a little Naruto, you're in luck, as I review Naruto Shippuden: Collection 9. We're still taking a break from the manga storyline, as the creators insert some filler to allow for more source material to be drawn. But unlike what you may normally expect from shonen anime, this stretch of filler is pretty good. Click on the review to find out just how good.

Naruto Shippuden: Collection 9 is out today, courtesy of Manga Entertainment.