Blu-ray
The Other Guys: Extended Cut 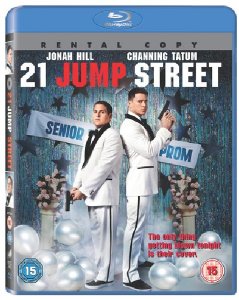 Sony Pictures Home Entertainment have announced the release of action comedy 21 Jump Street for 9th July on both Blu-ray and DVD. Not being quite so hip and down with the kids as we used to, we suspect this is a movie cash in on the late 80s TV series.

Oh we love this bit, the blurb says it has been rated 15 for crude and sexual content, pervasive language, drug material, teen drinking and some violence. What more could a popcorn crowd want? Extras? We get extras too!

The DVD will carry a recommended retail price of £19.99, whilst the Blu-ray will set you back £22.99. DVD purchasers get a commentary track with cast and the director, one Back to School making-of featurette and deleted scenes.

Blu-ray fans are better served with all the aforementioned plus two gag reels, Brothers In Arms featurette about the stunts and comedy, Johnny Depp On Set featurette about the lead character originally played by Depp, The Rob Riggle Show featurette discussing the comedy of Riggle, Peter Pan on The Freeway featurette which looks behind-the-scenes at shooting the action-packed freeway scene, and lastly a Not So Slim Shady featurette.

Both formats will include free access to a cloud-based UltraViolet account, enabling them to access their film through any UltraViolet-compatible service or device, from PCs and tablets to TVs and smart phones.

Schmidt (Hill) and Jenko (Tatum) are more than ready to leave their adolescent problems behind. Joining the police force and the secret Jump Street unit, they use their youthful appearances to go undercover in a local high school. As they trade in their guns and badges for backpacks, Schmidt and Jenko risk their lives to investigate a violent and dangerous drug ring. But they find that high school is nothing like they left it just a few years earlier - and neither expects that they will have to confront the terror and anxiety of being a teenager again and all the issues they thought they had left behind.