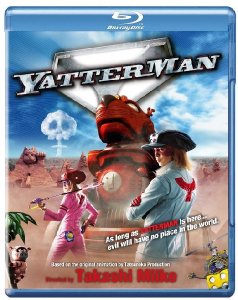 Gan, the only son of a toy shop owner, and his girlfriend Ai are just normal teens who like to tinker away with robotic inventions - that is, when they're not out keeping the world safe from evil! Together with their giant robot dog Yatterwoof, and their small incompetent robot Toybotty, Gan & Ai transform into crime-fighting duo Yatterman to fight for world peace. Waging battle against perennial nemesis, the Doronbo gang (formed by sexy villainess Doronjo and her lackeys Boyacky, and Tonzra), the trio will stop at nothing to recover the powerful wish-granting Skull Stone, but they'll have to get past Yatterman first!