Blu-ray
Berserk: The Golden Age Arc 1 - The Egg Of The King Blu-Ray/DVD Combi

A Week Of Kazé

It's a brief review roundup this week, and it comprises a fair bit of Kazé tidbits. The first thing to note is that hot on the heels of Viz Media's announcement last week of the acquisition of the Berserk movies, Kazé followed up with the confirmation that they have the licence to distribute the films in the UK and Eire. Expect the first to hit our shores later this year.

The other Kazé news is that the Bleach movies, Bleach 3: Fade to Black, which is making its UK debut, and Bleach 1 and 2, the first two films which are due their HD upgrades, have all been delayed because of lateness of stock issues. You'll now be able to get these on the 28th of May 2012. 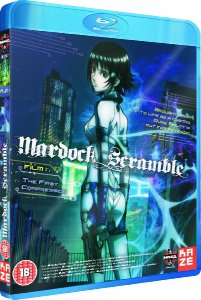 Just the one anime review for you last week, and it too is a Kazé title. I got to take a look at the hottest anime ticket in town, Mardock Scramble: The First Compression on Blu-ray, and it's a high definition delight. It's been a while since anime has yielded a decent cyberpunk thriller, but Mardock Scramble's dystopian vision of the future is just what the doctor ordered. Not only is it a delicious bit of sci-fi, it's also edgy and controversial in just the right way, taking themes of child abuse, prostitution, incest, and using them to craft a very engaging story. It's also got a talking mouse in it. A teenage prostitute named Rune Balot is almost murdered by a client, but is brought back from the verge of death as a cyborg in order to testify against him in court. But he's not too keen on testifying.

Mardock Scramble: The First Compression is out on Blu-ray and DVD today, and Manga Entertainment distribute it on behalf of Kazé.