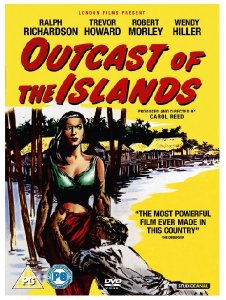 OUTCAST OF THE ISLANDS
50th ANNIVERSARY

Peter Willems, a morally compromised man, is on the run from a scandal in Makassar when he finds himself stranded on a remote Indian Ocean trading outpost, where his malign influence soon spreads to all around him, including fellow English ex-pat Almayer (Robert Morley) and the crafty native Babalatchi (George Coulouris). With brutal candour the film depicts his gradual decline as his lust for the daughter of a local chieftain and his double-crossing combine to undo him.

Carol Reeds follow-up to his triumvirate of classics, The Fallen Idol, Odd Man Out and The Third Man, Outcast of The Islands was BAFTA nominated in 1953 for Best British Film. Showing a keen continuation of the director's rich visual style and love of projects with psychological complexity, the film is a finely detailed exploration of the stormy waters of imperial colonisation and a vital character study. To celebrate its 50th Anniversary, the film will be released on DVD for the first time in the UK this April.