Winning over critics and fans alike, James Acaster has earned himself a reputation as one of the most hotly tipped acts of 2012. Following a smash-hit, critically acclaimed debut at the Edinburgh Festival with Amongst Other Things, James will be performing his unique brand of absurdity across the UK from March.

Effortlessly confident, James's appreciation for the whimsy and detail of everyday life are a breath of fresh air. His laid back style, playful wit and appetite for the unconventional make for an evening of mirth and hilarity, and a night in his company is a treat to behold. 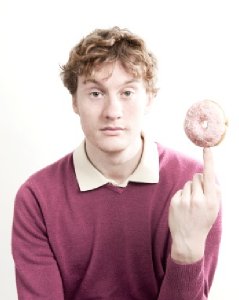 Since winning Laughing Boy New Act of the Year, James has gone from strength to strength appearing on Dave's One Night Stand, Russell Howard's Good News (BBC Three) and Show & Tell (E4) whilst also playing to over 100,000 people on tour with Milton Jones.