Article
Eric Cantona stars in action thriller Switch out in Cinemas, DVD and Blu-ray during March and April 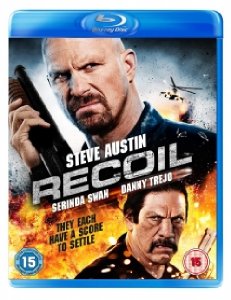 After the murder of his family, a former cop turns vigilante in order to find the criminals that have slipped through the system and exercise his own brand of ruthless justice in the hard-hitting and gripping action release, RECOIL, out on Blu-ray and DVD from Entertainment One on 16th April 2012.

When honourable police officer Ryan Varrett's (Austin) entire family is viciously murdered, the one-time good guy cop is forced to go rogue - breaking the laws he once swore to uphold - in his quest for justice. The primary targets for Varrett's revenge are a murderous biker gang, a corrupt local police, and a cold-hearted crime lord named Drayke (Trejo).