DVD
Contender, The (US)

Blu-ray
And Soon The Darkness

Article
Hot guys and girls in a sauna? 247°F comes to DVD and Blu-ray in March 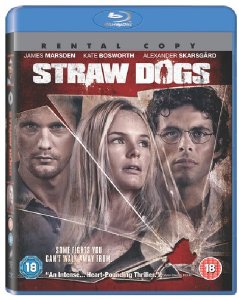 Some fights you can't walk away from

London, UK. 23/12/2012 - In a reimagining of the controversial classic, a terrorized couple is pushed to their breaking point in the intense psychological thriller STRAW DOGS unleashed on Blu-ray™, DVD and Digital March 12 from Sony Pictures Home Entertainment. James Marsden (X-Men), Kate Bosworth (21) and Alexander Skarsgård (TV's "True Blood") sizzle in this suspenseful story of a young married couple who, after being victimized by a gang of violent locals, decide to take the law into their own hands.

Killer bonus features include commentary with writer/director Lurie and the featurettes "Courting Controversy: Remaking a Classic," "The Dynamics of Power: The Ensemble," "Inside the Siege: The Ultimate Showdown" and "Creating the Sumner House: The Production Design."

Synopsis
A young couple (James Marsden and Kate Bosworth) moves to a quaint southern town. Soon their perfect getaway turns out to become a living hell when dark secrets and lethal passions spiral out of control. Trapped by a pack of depraved locals led by a ruthless predator (Alexander Skarsgard), they face a night of agonising suffering and endless bloodshed. Now their only hope for survival is to become more savage than their merciless torturers.

It has a run time of approximately 110 minutes on Blu-ray™ and 105 minutes on DVD and has been rated 18.

Pricing and bonus features on Digital editions of STRAW DOGS may vary by service provider.