DVD
They Came From Beyond Space
Related Articles

Article
TV sci-fi drama Caprica: Part One out on DVD in January 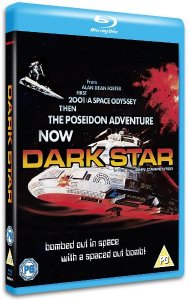 Fabulous Films is proud to announce

This all new Blu-ray edition has been sourced from an original 16 x 9 35mm theatrical print. The film was originally shot on 16mm, and then blown up to 35mm for theatrical distribution. The new master has been subject to a new grade and extensive manual frame by frame digital restoration.

This is the finest presentation of this Science Fiction Stoner Classic

SYNOPSIS
John Carpenter's pulp science fiction classic- this brilliantly clever and funny parody of Stanley Kubrick's 2001: A Space Odyssey, follows a warped intergalactic mission to blow up unstable planets. Four bored astronauts fill in time between missions catching up on their tans with the help of a sunlamp, playing with suspiciously plastic-looking alien mascot they are taking back to Earth and conversing with their female version of Hal. Things start to go horribly wrong as the spaceship computer misfires and a surfer - makes it back to Earth Surfing on an improvised board. Dark Star was intended to be a 68 minute student film. Hollywood Producer Jack Harris managed to convince the film-makers to shoot 15 minutes of extra footage and released the expanded version theatrically.

Dark Star is distributed by Fabulous Films and is available from all good Blu-ray stockists from 23rd January 2012.