Article
ITN documentary The Queen: A Diamond Jubilee Celebration comes to DVD on 28th May

TV documentary The Iron Lady pops onto DVD in January 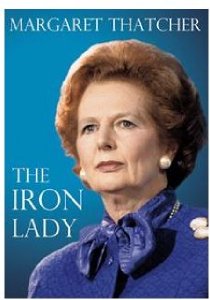 With the Oscar tipped film The Iron Lady attracting critical acclaim, not least for Meryl Streep's portrayal of Margaret Thatcher, this 90 minute DVD and television documentary could not be more timely with its authoritative portrait of Britain's first (and only) female Prime Minister. Featuring extensive footage of the Iron Lady in public and in private and with retrospective contributions from former Cabinet colleagues Lord Howe and Lord Heseltine, the programme includes previously unseen footage of Margaret Thatcher from her rise to power as a young Member of Parliament, to her emotional interview with ITN's Michael Brunson after her resignation as Prime Minister.

Love her or loathe her, Margaret Thatcher, a grocer's daughter from Grantham, was arguably the greatest British Prime Minister since Winston Churchill, and this long overdue retrospective of her career chart her significant impact on British and world politics. As Michael Brunson reflects: "There was a point when she stopped being an ordinary woman…and she became an extraordinary Prime Minister."

The many excerpts from her powerful speeches show her oratory prowess and the determination with which she tackled issues that previous politicians had shied away from. As Cecil Parkinson, a member of Margaret Thatcher's Cabinet from September 1981 to October 1983, says in the documentary: "She was the Prime Minster who really did root out Socialism." Ex-Conservative MP, Gyles Brandreth, another interviewee featured in the documentary, sums up Margaret Thatcher with the words: "… you might hate her, but you really felt she knew what she was doing."

Other contributors include Lord Heseltine, Lord Howe, political correspondent Nicholas Owen, writer and broadcaster Hugo Vickers and film director of The Iron Lady, Phyllida Lloyd. But perhaps the most remarkable footage in the documentary is of Margaret Thatcher - the Iron Lady - breaking down in tears when interviewed by Michael Brunson on 28 June 1991. In the previously unseen footage Margaret Thatcher is clearly emotional as she recalls the day her Cabinet refused to back her to go forward into the second ballot for the leadership of the Conservative party. It was the end of a significant era in British politics. The documentary's director, Alan Byron, summed up the documentary portrait of Margaret Thatcher as "an incredible woman, whose overwhelming strength of conviction led her to Number 10, but also contributed to her inevitable downfall."