Blu-ray
Pirates of the Caribbean: The Curse of the Black Pearl
Related Articles 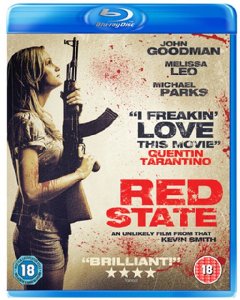 Red State is an explosive, edge of your seat action-horror film, which will draw you down a harrowing path where 'sinners' face their judgment day at the hands of a dangerous religious sect. This gripping and exhilarating film from Kevin Smith is released on DVD and Blu-ray through Entertainment One on Monday 23rd January 2012.

The boys wake, bound and half-naked deep in bowels of the church and immediately witness the brutal execution of another 'sinner.' Knowing they are next in line, the boys beg for their lives, but Pastor Abin Cooper (Michael Parks) and his cruel and warped congregation have other plans and embark on their reign of terror.

Trapped and terrified the boys' only chance of survival is to fight their captors, but the evil evangelists are ready to send them straight to hell. Unbeknown to the boys, the apocalypse looms even closer as Federal Agent Joseph (John Goodman) and his trigger-happy team is right outside, poised and ready to blow the church off the face of the planet.

Red State is a Tarantino-style assault that critics are calling "Brilliant!"; Kevin Smith's (Clerks, Dogma, Chasing Amy) film is fast-paced, as the remorseless and evil fundamentalists show their barbaric and savage nature, sickeningly redefining the definition of disturbing.

The DVD and Blu-ray also includes over 2 hours of bonus features comprising of the making of Red State, deleted scenes and a conversation with Michael Parks, allintroduced by Kevin Smith; plus the Blu-ray version has the very popular and exclusive Red State of the Union" Smodcasts.

Red State is available to buy on DVD and Blu-ray from Monday 23rd January 2012.