Article
Join the legendary Vincent Price in Theatre of Blood out on Blu-ray this May
Tags For This Item
Cho Dependent, Comedy, DVD, Edinburgh, Margaret Cho, News, PR, Stand up comedy, US Comedian
Recently Added Items

Named 'one of the funniest comedians in America' (New York Times) and 'an impressive radical voice' (London Evening Standard), stand-up's controversial diva Margaret Cho brings her newest concert film Cho Dependent to DVD in the UK on the 9th of January. Known for her frank brand of humour, Cho delivers riotous yet thought-provoking material. 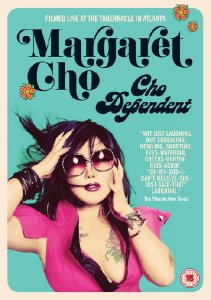 With fresh family stories about her mother and her grandparents, Cho also takes aim at the Palins, her stint on Dancing With the Stars, cruising in the south, smoking pot and living in a world with 'sexting.' Honest, passionate and hilarious, Cho Dependent is simply Margaret Cho at her very best.Cho has gained celebrity status in the U.S. over the course of her career, starring in her own television programme on VH1, The Cho Show. She is also on the cast of Lifetime's Drop Dead Diva, was a contestant on ABC's Dancing With the Stars and has even appeared on NBC's 30 Rock as North Korean dictator Kim Jong-il!


Extras : Behind the scenes footage