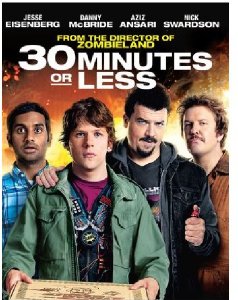 From the Director of Zombieland

The special features on the DVD include deleted scenes, outtakes, and "Blowing Up with the Cast & Crew of 30 Minutes or Less" where the cast and crew discuss their experiences on set and behind the scenes. The Blu-ray Disc contains everything included on the DVD, plus a Picture-in-Picture Commentary track with Jesse Eisenberg, Danny McBride, Aziz Ansari, Nick Swardson and Director Ruben Fleischer, as well as the featurette, "The Perfect Crime: Action & Comedy in 30 Minutes or Less," and a look into the car chases, flamethrowers, and gunplay that make this film not only hilarious but awesome.

Nick (Jesse Eisenberg) is a small town pizza delivery guy whose mundane life collides with the big plans of two wanna-be criminal masterminds (Danny McBride and Nick Swardson). The volatile duo kidnaps Nick and forces him to rob a bank. With mere hours to pull off the impossible task, Nick enlists the help of his ex-best friend, Chet (Aziz Ansari). As the clock ticks, the two must deal with the police, hired assassins, flamethrowers, and their own tumultuous relationship.