Article
Great Scott! Secret Cinema bringing you the Back to the Future experience in July and August

Molotov Jukebox, London's wildest troop of nomadic party-starters return with their explosive cover version of 'Get Ready' by the Temptations, set for release on 14/11/11.
Molotov Jukebox are six musical souls bound together by love; love for each other, love of music and love of making rooms full of people dance till they drop. Fronted by the super-talented accordion player/vocalist/actress Natalia Tena (Harry Potter, About A Boy, Game Of Thrones) the band comprises of Angus Moncrieff (trumpet), Sam Apley (violin), Max Burnett-Wain (drums), Adam Burke (guitar) and Tom Wilson (Bass). Their incendiary live shows are fast earning them legendary status. A whirling dervish of gyp-step funk, sassy-soul and Balkan beats have taken them everywhere from Brazil to Glastonbury and led to a 'Best Breakthrough Artist' nomination at this years UK Festival Awards alongside the likes of Jessie J, Ed Sheeran and Katie B.

Recorded at the famous RAK Studios in London 'Get Ready' is a raucous track with the summer sun coursing through its veins. From the start of the song the punctuated accordion and syncopated guitar sit perfectly over the beat, creating an effortless groove that really lets Tena's sublime vocal breathe. Backing vocals then build and explode with screaming horns and percussion into a chorus that's like popping open a carnival in a can. 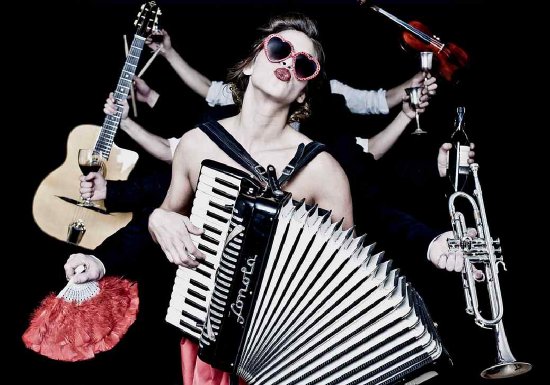 Having released their critically lauded E.P 'Double Dare' earlier this year and wowed festival audiences at Secret Garden Party, Bestival, Glastonbury, T In The Park, Kendal Calling and The Big Chill Festival to name a few it's clear that Molotov Jukebox will soon be a name on everybody's lips.

Molotov Jukebox support The Kooks in Berlin (05/11/11) and tour Brazil in the New Year.

Watch the video below:-