Blu-ray
The Happiness of the Katakuris

Horror flick Frankenhooker is coming to Blu-ray in January 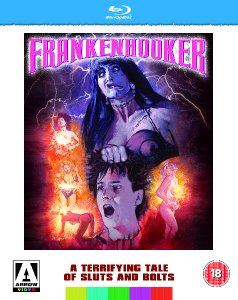 Finding a girl when you're a nerdy science geek can be hard. But what happens if that special someone dies in a bizarre gardening accident and it's all your fault?

Meet Jeffrey Franken. He's just killed the love of his life and now he's going to rebuild her... from the body parts of the dead streetwalkers who exploded when he introduced them to a lethal new drug, Supercrack!

Little does he know that a good recipe requires the correct ingredients. Jeffrey isn't putting his life back together; he's building... a Frankenhooker!

From the twisted imagination of Frank Henenlotter (Bad Biology; the Basket Case trilogy; Brain Damage), and starring James Lorinz (Street Trash; Last Exit To Brooklyn), comes a movie that pays loving tribute to the worst excesses of the American Grindhouse.