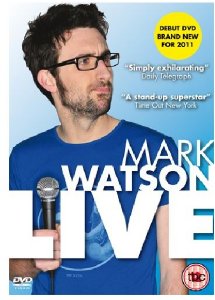 "His is the comedy of self-doubt, of everyday awkwardness, of embarrassing families and small triumphs we can all relate to" - Observer

'A scholar, a gentleman and brilliant stand-up' - Evening Standard

One of Britain's most talked-about comedians and Edinburgh Festival favourite, Mark Watson will be releasing his eagerly-awaited debut DVD this November. With a host of special extras, Mark Watson Live will be available on DVD and digital download from 28th November 2011.

Recorded live at a sold-out show at the Bristol Hippodrome in July, Mark's debut DVD will feature the best material from his high-profile and award-winning career. Exclusive extras will include a video diary from his latest tour, behind-the-scenes footage and a special feature filmed at Bristol Zoo.

As well as being known as one of the hardest-working stand-ups, Mark is TV and radio regular - his own shows have included We Needs Answers (BBC Four), Mark Watson Kicks Off (ITV4) and two series of the critically acclaimed Mark Watson Makes The World Substantially Better (BBC Radio 4). Mark is also a regular on panel shows such as Mock The Week, 8 Out of 10 Cats and has guest hosted Never Mind The Buzzcocks and the NME Awards. This Autumn, he will be fronting a brand new comedy series for BBC Radio 4 and will play team captain in an exciting new Channel 4 panel show amongst other TV and stand up appearances.