DVD
Robert Schimmel: Life After Then 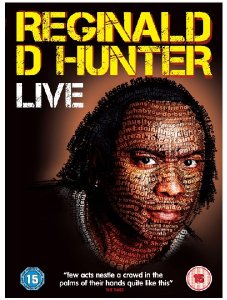 "HE SHIMMERS WITH STAGE PRESENCE AND HIS COMIC TIMING IS SHARP ENOUGH TO BURST BALLOONS." Independent

In the twelve years since he began performing, Reginald D Hunter has become one of the UK Comedy industry's best-known and most distinctive performers. His work is often brutally honest, frequently controversial but always meticulously measured and thought out.

"FEW ACTS NESTLE A CROWD IN THE PALMS OF THEIR HANDS QUITE LIKE THIS…COMICALLY ASTUTE, REWARDINGLY PROVOCATIVE." Times

He has become a familiar face on primetime television shows such as 8 Out Of 10 Cats, Never Mind The Buzzcocks and QI and is a frequent guest on Have I Got News For You. He has recently appeared in Argumental for Dave Channel and Would I Lie To You for BBC1. He also starred alongside Andy Hamilton in BBC4's It's Only A Theory and appeared in the New Years Day episode of the hugely popular Live At The Apollo (BBC1)

His first major tour sold out in venues across the UK and he will be touring the country again this Autumn before returning to Los Angeles where he is currently developing a TV series with American Channel, Showtime.