Psychological thriller Retreat comes to DVD and Blu-ray this October 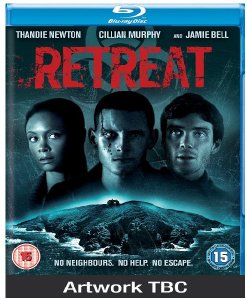 No neighbours. No help. No Escape

RETREAT is a tense psychological thriller portraying one couple's desperate attempt to rekindle their love despite tremendous grief and an unimaginable fear bearing down upon them. In RETREAT there's no room for error and no getting away!

SYNOPSIS
Taking an isolated break on an uninhabited island Martin (Murphy) and Kate (Newton) are about to find that their island retreat is about to become a stone prison of unimaginable terror. When a blood soaked stranger (Bell), stumbles through their door with an apocalyptic story of a virus sweeping across Europe decimating all in its path, their lives are turned upside down as they face the end of everything they know. Using all means necessary, they must fight to escape the approaching threat. But escape is only the beginning of their terrifying fight for survival...

In a series of tense twists, the captive couple are forced to use their ingenuity to outwit the equally volatile and charismatic Jackin an attempt to unravel the real truth. Loyalties divide and merge and paranoia sets in, culminating in a violent and shocking conclusion.