DVD
Sea Wolves, The (US) 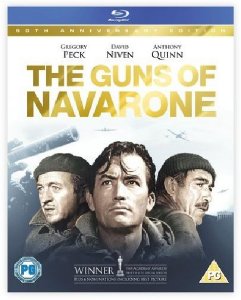 THE GUNS OF NAVARONE

London, UK. 09.09.11 - Sony Pictures Home Entertainment celebrates the 50th Anniversary of the heroic WWII epic adventure The Guns of Navarone, based on the Alistair MacLean novel and directed by J. Lee Thompson (Battle for The Planet of the Apes, MacKenna's Gold, Cape Fear, What A Way To Go), with the release of a 50th Anniversary Edition Blu-ray on October 24.

Blacklisted screenwriter Carl Foreman (High Noon, The Bridge on the River Kwai) was determined to re-establish both his name and credibility after spending most of the 50's working in anonymity. To accomplish this, he decided to bring Alistair MacLean's best-selling novel to the screen. Academy Award® nominee for Best Picture (1961) and winner for Best Special Effects (1961) and a Golden Globe® winner for Best Picture (Drama, 1961), The Guns of Navarone is supported by an all-star cast and produced on a grand scale. The film was an enormous success, receiving seven 1961 Academy Award® nominations.

In keeping with previous restoration efforts by Sony Pictures, The Guns of Navarone 50th Anniversary Edition has been newly remastered following an extensive 4K digital restoration from the original camera negative. Other classic Columbia Pictures titles that have undergone 4K restoration efforts for subsequent Blu-ray releases include Dr. Strangelove, The Bridge on the River Kwai and Taxi Driver.

Academy Award®-winners Gregory Peck (1962, Best Actor, To Kill A Mockingbird), David Niven (1958, Best Actor, Separate Tables), and Anthony Quinn (1952, Best Supporting Actor, Viva Zapata!; 1956, Lust For Life) star as a team of Allied military specialists recruited for a dangerous but imperative mission: to infiltrate a Nazi-occupied fortress and disable two long-range field guns so that 2,000 trapped British soldiers may be rescued. Faced with an unforgiving sea voyage, hazardous terrain, and the possibility of a traitor among them, the team must overcome the impossible without losing their own lives. Adapted by screenwriter Carl Foreman from Alistair MacLean's best-selling novel, THE GUNS OF NAVARONE was nominated for seven Oscars®, including Best Picture, and won for Best Special Effects (1961).

· THE RESISTANCE DOSSIER OF NAVARONE
The Blu-ray interactive dossier gives the viewer all new access to detailed information on THE GUNS OF NAVARONE, the real world history that inspired the film, and insights from film and military historians on the continuing effect the film has on popular culture.

The Guns of Navarone has a running time of approximately 145 minutes.The film is rated PG.

Academy Award®" and "Oscar®" are the registered trademarks and service marks of the Academy of Motion Picture Arts and Sciences.