Blu-ray
The Strange Case of Dr. Jekyll and Miss Osbourne 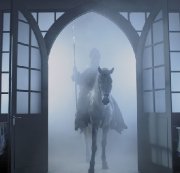 
IT'S GOING TO BE A KILLER CHRISTMAS…

It's Christmas time and a swath of brutal murders and mysterious disappearances leave a city in shock. Then when eye-witnesses report sightings of Saint Nicholas flying over rooftops, it becomes apparent that this will be one Christmas, the city will never forget.

As the killing escalates, one ex-cop unearths a dark, well-kept secret behind the famous legend. Buried deep in church vaults, a beloved Saint Nicholas is revealed as a vengeful killer who, during a full moon on December 5th, reins terror upon unsuspecting villagers.

But when his former colleagues scoff at his revelations, he decides to take the law into his own hands to save his city from the bloodthirsty bishop's deadly revenge.

This Christmas, Santa is coming to slay…