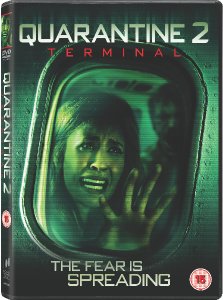 QUARANTINE 2: TERMINAL
The Terrifying Sequel to Quarantine Debuts on DVD on August 15


London, UK. 12/07/11 - The deadly virus has escaped the infected building and is now on board a late night flight. No one is safe when Quarantine 2: Terminal hits DVD on August 15 from Sony Pictures Home Entertainment. The sequel to the film Quarantine takes up where the previous installment left off and will be available on DVD for £12.99.

Synopsis:
Earlier tonight, a bizarre disease was unleashed in a run-down Los Angeles tenement ... and no one got out alive. Yet something escaped. Now, aboard Flight 318, the first symptoms begin to show. As the infection begins to take root, innocent passengers suddenly transform into terrifying, bloodthirsty killers. Forced to land at an isolated terminal, and surrounded by armed government agents, the crew and passengers grow increasingly desperate. The only question now is how far they will go to survive.

Quarantine 2: Terminal has a running time of 83 minsand is rated15.

Artwork and digital clips are available for download at www.sphepublicity.comVisit Sony Pictures Home Entertainment on the Web at www.sonypictures.co.uk