DVD
Pirates Of The Caribbean: On Stranger Tides

Blu-ray
Pirates of the Caribbean: The Curse of the Black Pearl

DVD
Pirates of the Caribbean: The Curse of the Black Pearl (US)

DVD
Pirates of the Caribbean: The Curse of the Black Pearl (UK)

Article
Breakfast at Tiffany's is coming to Blu-ray this September

Pirates of the Caribbean: On Stranger Tides splashes onto DVD and Blu-ray this September 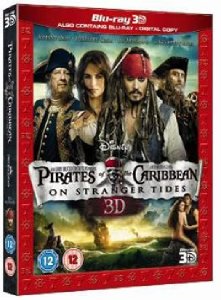 PIRATES OF THE CARIBBEAN ON STRANGER TIDES

As announced by Jerry Bruckheimer via Twitter - www.Twitter.com/BRUCKHEIMERJB - It's time to return to the high seas with the world's favourite pirate as Pirates of the Caribbean On Stranger Tides hits stores exclusively on Disney 3D Blu-ray, Double Play & DVD from 12 September 2011.

The fourth instalment of the phenomenal series has already taken over $1 Billion at the worldwide box office and once again delivers thrills, adventure, humour, action and excitement by the keg load.

Johnny Depp is back as the iconic Captain Jack Sparrow in a tale of truth, betrayal, youth....and mermaids! Crossing hearts (and swords) with Depp on this fantastic new voyage is Hollywood beauty Penelope Cruz, Oscar™ winner Geoffrey Rush - reprising his role as the legendary Barbossa - and British acting legend Ian McShane as the most feared pirate of them all; Blackbeard.

The legendary Bruckheimer has produced all four of what is already one of the most successful franchises in movie history. In this brand an in this new action-packed adventure, Captain Jack crosses paths with the enigmatic Angelica (Penélope Cruz), he's not sure if it's loveor if she's a ruthless con artist who's using him to find the fabled Fountain of Youth.

When she forces him aboard the "Queen Anne's Revenge," the ship of the legendary pirate Blackbeard (Ian McShane), Jack finds himself on an unexpected adventure in which he doesn't know whom to fear more: Blackbeard or Angelica, with whom he shares a mysterious past. The international cast includes franchise vets Geoffrey Rush as the vengeful Captain Hector Barbossa and Kevin R. McNally as Captain Jack's long-time comrade Joshamee Gibbs, plus Sam Claflin as a stalwart missionary and Astrid Bergès-Frisbey as a mysterious mermaid.

Filled with eye-popping battle scenes, mystery, all-out wit, and complete with a bounty of bonus features, this is one thrilling journey fans won't want to end.
Pirates of the Caribbean On Stranger Tides is available from 12 September 2011 on Disney 3D Blu-ray, Double Play & DVD.

Notes to Editors
About The Walt Disney Company in Europe, Middle East and Africa:
The Walt Disney Company (TWDC) is a leading diversified international family entertainment and media enterprise with five business segments: media networks, parks and resorts, studio entertainment, consumer products and its interactive media group. TWDC has had a presence in Europe Middle East and Africa (EMEA) for more than 70 years, operating in over twenty three countries with over 5,700 employees. Disneyland Paris opened in 1992 and is now Europe's number one tourist destination.

TWDC is a major film distributor in the region with recent successes such as 'Toy Story 3' and 'Alice and Wonderland' and is also one of Europe's foremost suppliers of TV content, distributing Disney- branded and non-branded television including the hit series 'Desperate Housewives' which ranks in the top 10 US series on air in France, Germany, Italy and the UK with young adults. Disney's consumer products - including apparel, toys, home décor, food, stationery, books and magazines - are available at specialist and mass market retailers as well as more than 100 Disney Stores across Europe. The Disney Channel originally launched in the UK in 1995 and in 2009 launched in an additional fifteen EMEA territories, making it available in over 58 million homes while Disney XD, the new boy-focused girl-inclusive channel has launched in thirteen territories in the region.