Article
A ghostly island in Uninhabited out on DVD this August 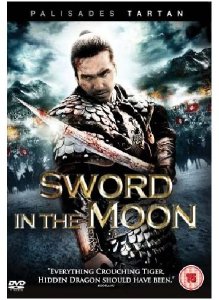 "WHAT CROUCHING TIGER, HIDDEN DRAGON SHOULD HAVE BEEN"
-HOOPLA.NU

"A PEDAL TO THE MEDAL, MARTIAL ARTS ACTIONER"
-VARIETY

Referring to more than just its status as one of Korea's highest budget films of 2003, Justin Bowyer's film notes state "Almost every aspect of the film and its production is set on an epic scale…Ultimately Sword in the Moon stands up both thematically and cinematically with many of the milestone martial arts actioners: Ang Lee's Crouching Tiger, Hidden Dragon (which kick-started Western interest in the genre), Iron Monkey, House of Flying Daggers and Korea's own bench-mark epic Musa the Warrior."

A series of high-ranking officials are being systematically eliminated by a sleek assassin and his female assistant, and arrogant master swordsman General Choi (Jo Jae-hyeon) is charged with putting an end to the carnage. During a previous time of political upheaval, the Clear Wind, Shining Moon martial arts school was caught in the middle and its members ruthlessly slaughtered. Top student Choi swore allegiance to the usurpers and was spared; now, his former friend, Yun (Choi Min-su) is exacting vengeance on behalf of the victims.

Directed by: Eui-seok Kim (THE MARRIAGE LIFE, HOLIDAY IN SEOUL)

About Palisades Tartan:
Palisades Tartan has emerged as one of the premier distributors of independent and arthouse cinema in the US and UK and has been on the forefront of consumer trends. Straddling both continents, their film line-up boasts an impressive repertoire in the UK including the Ingmar Bergman library, Wong Kar Wai's 2046 and IN THE MOOD FOR LOVE. Apart from many favorites such as Paul Verhoeven's BLACK BOOK and Carlos Reygadas's SILENT LIGHT, the library is anchored by Park Chan-wook's Cannes jury prize winner, OLDBOY, the film that famously introduced the Western World to the Asia Extreme brand.

Tartan Films was originally founded in 1984 in the UK and is credited with bringing Asian Extreme film to the West as well as some of the most compelling art house films of the last quarter century. In 2008, Palisades Pictures acquired Tartan Films' film library assets. The new company Palisades Tartan has operations both nationally and internationally.

Palisades Tartan will continue to expand an already distinctive and provocative slate of films by focusing on quality film acquisitions, thus significantly increasing the size of their overall library in both territories. Palisades Pictures and its parent company Palisades Media Corp is a prestigious financier of print & advertising for the independent film market. Together with its affiliate, Palisades Media Asset Fund, Palisades has securitized and financed more than 550 films.