The BBFC Scythe Their Way Through Another Anime

Sensationalist enough for you? The anime in question is MVM's forthcoming Ikki Tousen: Dragon Destiny, and to set the record straight, the BBFC don't object to any of the anime series itself. It's one of the bonus mini-episodes provided in the extra features that has earned their wrath. It's a communal bathing skit that sees a pre-pubescent girl fascinated by the cleavage of the older bathers. It's what passes for lame comedy in Japan, but in the UK, it will unleash a paedophilia plague that would make a zombie virus look like the common cold, apparently. Of course 10 seconds with Google negates all of the BBFC's protective measures.

Normally it's fifty-fifty with the BBFC when it comes to material like this, and previous similar decisions for Code Geass for example, lead more to concern about the proclivities of the actual censor doing the certifying, than it does the material, but I'd have a hard time defending this one. However, it must be said that in Australia, whose own censorship board usually makes the BBFC look like a bunch of bohemians, the episode was passed uncut, rated 15.

Remember, it's only the extras. The actual Dragon Destiny episodes will be released uncut in November by MVM.

New Shows at Anime On Demand

I feel like calling them Anime On Delay, given how slowly they get around to unleashing the shows that they promise. But they're like British Rail, they do get there, before they're privatised and sold off…

Anyway, this week has finally seen the arrival of Nura: Rise of the Yokai Clan, and Mystic Archives of Dantalian. You can see the first seven episodes of the former, and the first three episodes of the latter, if you click the link to the right. 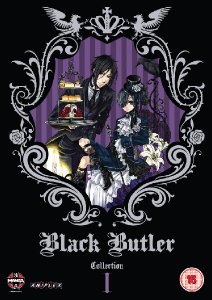 This week I had one anime to review, Black Butler: Season 1 Part 1. The tale of one boy and his butler has long been anticipated by UK fans, judging by the sheer amount of squee being emitted on social networking sites and anime forums. Black Butler is a supernatural tale of the young heir to the Phantomhive family, Ciel Phantomhive, making a deal with the devil after his parents are murdered and he is abducted and tortured. When he returns home, he has a devilish butler in tow, Sebastian Michaelis, and together they investigate supernatural crimes in the underworld for Queen and country in Victorian England. Ciel wants Sebastian's help in gaining revenge on those who hurt him, while Sebastian wants Ciel's soul when he is done. Would you believe that Black Butler is something of a comedy?

Black Butler: Series 1 Part 1 comes out on the 15th August 2011, thanks to Manga Entertainment.