New Licences For The UK (Not Manga)

Rarely a week goes by without mention of a new licence from Manga Entertainment, which does tend to drown out their competitors. But the past week has seen some Facebooking from MVM, and some Twittering from Beez.

Beez have a mecha show in the works, which they will probably announce at Ayacon. It's something a little older, something fans have been clamouring for, and speculation is already wandering from the obvious to the ridiculous, anything from The Big O II, via the Gurren Lagann Movies, to a potential licence rescue of Evangelion.

MVM on the other hand have been even more oblique, telling us that a likely December release is in store for their next licence of an older series, never before released in the UK. Older in this business can mean as little as six months, but fan speculation for this licence has been even wilder. 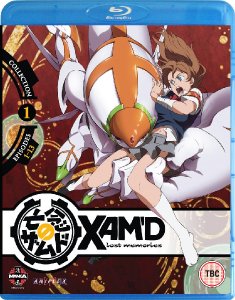 Last week was a delightful one for anime reviews, as I got to see the cream of the crop, beginning with Xam'd Lost Memories: Part 1 on Blu-ray. It's a good old-fashioned adventure serial, where a teenaged protagonist undergoes a fantastic transformation, after being 'infected' in a terrorist attack. Rescued by a passing mail ship, he has to go on a journey of self-discovery, to come to terms with what he has become. At the same time, the family and friends he leaves behind have to come to terms with his loss, and what the events mean for their island home, caught up in a devastating war. It's a tale rich in narrative, great characterisations, and with cinematic animation throughout. The soundtrack is pretty nifty too.

Next up it was my most wanted boutique purchase of 2011. When the Region 1 Sound of the Sky: Complete Collection - Limited Edition came into my hands, I was like the Abominable Snowman in the Bugs Bunny cartoons. "Oh, my own widdle Sound of the Sky Collection. I will hug it, and I will squeeze it, and I will call it George…" It's a fantastic slice of life show, set in an undefined future world, ravaged by war, where society is a pale shadow of what it once was. In it, all a young girl named Kanata Sorami wants to do is to learn how to play music like the soldier that once inspired her. The only way she can afford that is if she joins the army as a bugler. She's assigned to the border town of Seize, where she is to be part of the 1121st Tank Platoon, with four rather unconventional girls who joined the military for their own reasons. Click the review to read an unparalleled gushing of joy.