Article
Lawrence of Arabia finally arrives on Blu-ray this September 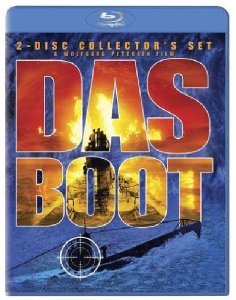 "The execution is second to none; taut, claustrophobic and overwhelming the depth charge sequence alone a tour de force of sound and vision to depict truth. One of the greats."
*****
Empire

"shows the reality of war in all its tense, dirty excitement and boredom. Astonishing film-making."
Total Film

Digitally Restored and Fully Remastered. Available For the First Time on Blu-ray™ On SEPTEMBER 5

Following an extensive 4K restoration from the original negative, the director's cut of this prized film adds 60 nail-biting minutes to the original version, which was nominated in 1982 for six Academy Awards® including Best Director, Best Cinematography, Best Effects/Sound Effects Editing and Best Sound. Also included in the two-disc set is the original theatrical version of the film and almost three hours of all-new Blu-ray exclusive special features, including a retrospective documentary with Director Wolfgang Petersen.

The film follows the lives of a fearless U-Boat captain Capt.-Lt. Henrich Lehmann-Willenbrock (Jurgen Prochnow, The Da Vinci Code, Air Force One) and his inexperienced crew as they become engulfed in the "Battle of the Atlantic" during World War II. The crew confronts the constant and paralyzing fear of the unknown enemy above in the claustrophobic iron belly of a German U-boat. Director Wolfgang Petersen's close and focused shots meticulously capture the gritty reality of pursuing rival ships from undersea in a blind environment, humid with sweat and rank with the bitter scent of metal.

Masterfully crafted by Petersen (Troy, Air Force One) and critically acclaimed as one of the best war films of all time, Das Boot is a masterpiece that should be part of every film enthusiast's collection. The two-disc Blu-ray is tightly packed with special features including a retrospective documentary of the making of the film, seven vignettes taking viewers on an intimate tour of a German U-boat, two featurettes offering insights from wife and First Assistant Director, Maria Petersen and a look into the making of the Director's Cut, historical material with footage detailing the evolution of submarine battles during World War II and a director's commentary.

Das Boot Synopsis:
At the height of WWII, a young submarine crew heads out to sea on a top-secret mission that all but ensures most will never make it home alive. Ordered to patrol the Atlantic and destroy an allied armada bringing supplies to Britain, these raw recruits must band together, bracing themselves against a depth-charge assault from an unseen enemy. Oscar®-nominated director Wolfgang Petersen's epic adventure deftly explores tension as pressure builds to an explosive climax, packing a visceral punch few movies can match.

2-Disc Blu-ray Special Features:
Das Boot has a run time of 208 minutes and is rated 15

"Oscar®" is the registered trademark and service mark of the Academy of Motion Picture Arts and Sciences.