DVD
Doc of the Dead

DVD
War of the Worlds: The Final Season Boxset 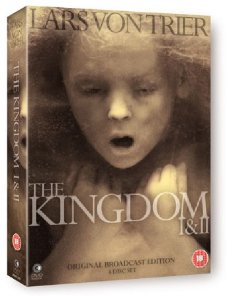 THE KINGDOM I & II

Groundbreaking director Lars Von Trier's critically acclaimed TV series The Kingdom made a huge impact when it first aired and quickly achieved cult status and its reputation continues to grow.

Now for the first time ever in the UK comes the full-length original broadcast version of The Kingdom Series I and II, which will be released as a stunning four-DVD collectors set complete with a slew of fantastic bonus features courtesy of Second Sight on 4 July 2011.

Within the walls and labyrinthine corridors of a Danish hospital otherworldly events are unfolding. The ghost of a young girl haunts the lift, a phantom ambulance appears each evening and the eccentric staff are preoccupied with secret societies, malpractice cases and a pregnancy that has taken a frighteningly bizarre turn. Amid the unfolding drama,spirits and demons have been awakened. Welcome to The Kingdom.

Described by Variety as 'a lunatic, Twin Peaks-like meld of black-comedy', The Kingdom  is Von Trier at his most outlandish and compelling, a must-see.

'The best ghost story since The Shining'
Film Review