Dramatic thriller Wasted on the Young out on DVD this August 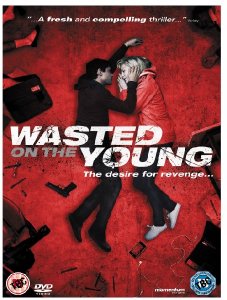 WASTED ON THE YOUNG

School's out for summer as Wasted on the Young comes to DVD from 15th August 2011, courtesy of Momentum Pictures.

Written and directed by Ben C. Lucas, Wasted on the Young is a tense high school drama that makes a strikingly stylish impression.

The gripping film stars Oliver Ackland (The Slap, Cloudstreet) as Darren, and Alex Russell (Almost Kings) as cooler step-brother Zack, and follows the disillusioned and disaffected students of an elite high school, with the two brothers occupying opposite ends of the school's social hierarchy.

Bullied by the cool kids, Darren finds himself forced to act when his tormentors go too far by drugging and assaulting his best friend Xandrie, played by Adelaide Clemens (X-Men Origins: Wolverine, The Pacific). After being left for dead in the middle of nowhere, Xandrie suddenly makes a surprise return to school that sets off a chain reaction of events, threatening to trigger the implosion of Zack's elitist, self-made pedestal. Soon, the brothers' lives are at the mercy of the opinions of their disenchanted classmates.

Produced by Janelle Landers and Aidan O'Bryan, Wasted on the Young is a strikingly stylish portrayal of wealthy, wired teenagers battling against a school's corrupt power structure. With fast paced special effects, an addictive soundtrack and three stunning lead performances, Wasted on the Young is sure to create a stir when it's released on DVD on 15th August.