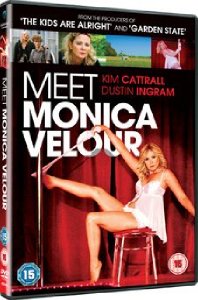 "A May to December love story of sorts...the leads are excellent, as heartbreaking and bleakly funny as love itself." Phil Wilding - Empire

Written and Directed by Keith Bearden

In this irreverent comedy, awkward teenager Tobe sets off on a life-changing road trip, set against a '30s jazz soundtrack and Indiana's expansive cornfields, as he travels across the state to meet Monica Velour, the woman of his dreams at a rare live appearance hundreds of miles away. Expecting his fantasy, Tobe is instead confronted with a harsh reality: Monica is a 49-year-old mum who lives in a trailer park, and her life is nothing like he imagined it would be. The last thing Monica needs is another complication in her life, but Tobe is determined to do whatever it takes to get close to her. Kim Cattrall gives a career-defining performance in this offbeat and endearing love story that appeals to the dreamerand the nerdin all of us.