Article
Beware of the Copyright Police

Article
If The Shoe Fits... The Odd World of Internet Sources

Article
The Internet is Wrong - Volume 3

Why Do Studios Still Treat Reviewers As Potential Pirates?

I had a few titles for this article, including The Ludicrous Over-Protectiveness of Studios, Who Does Warner Think They Are?, and even Why I Need To Start My Own PR Company. In the end you can see what I went with, and I'll show you that consumers aren't the only group of people large companies treat as pirates.

Having played with computers since 1981, I'm well used to annoying copy protection which gets in the way of a (not always) good game. I've lived through word look-ups in the black ink on red background hard to read manual fiascos, strange match-up wheels, lens based decoding gadgets you held up to the TV, and an almost endless stream of PC titles that would install to the HDD but still insist on having the original disk in the drive.

All of this whilst anyone with a pirated copy suffered none of it. These days more than half of the games I buy are from the likes of Steam, or for my iPhone or a console, so things don't seem too bad on that front. Perhaps if I bought anything from Ubisoft I might think differently, but so far nothing they make interests me.

But as a legitimate DVD buyer, I suffer endless copyright messages and enforced trailers before a menu trying to sell me more stuff, all of this whilst a pirate gets to visit the movie straight away. And I'm the one paying the studios money, how come the ones that aren't are the ones getting what they want? Blu-ray doesn't seem anywhere near as bad in this respect, with a lot of titles jumping straight to the menu or even the movie itself,

However the more things change, the more they stay the same. As any reviewer will tell you, some studios go to insane lengths to protect their content, treating even those that review their products and can potentially encourage many more sales, as someone who would copy and slam it on the Internet, a move that would harm the industry and ultimately the reviewer themselves.

Many times in the past, and it was nearly always the same studios that did this, Fox being one of the worst, we'd be sent what is known in the trade as a Check Disk. But for quite a few major titles, Fox and co would demand we return it within a few days for security reasons, because some idiot executive or manager somewhere thought doing this would protect it from being sent to the Internet. It never occurred to them that a dodgy reviewer could easily copy it within an hour and return the disk, and they'd be none the wiser. I guess that level of knowledge was beyond whoever made the decision.

Another thing they'd do is limit the number of copies sent out to a very small pool and try to keep track of them, which again would have no effect other than to annoy reviewers who couldn't get hold of one or would only see it after the release date. Other studios would send a special copy out with just the movie (often not even in the same format the final disk would be released as) and a constantly appearing Property Of message over the image, or a constant Time-code somewhere on the screen. 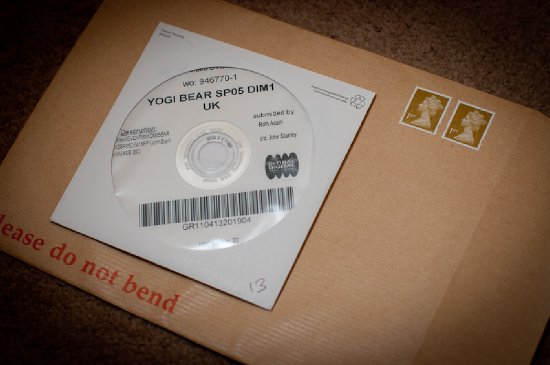 Now someone who writes reviews in 36pt text and is happy to review a major blockbuster courtesy of a VHS tape on a hotel room TV might find that acceptable, but we certainly don't. Our team are rather obsessed with movies, we've all spent a stupid amount of money on large TVs or projectors, and surround sound systems, we didn't do all this just to have our enjoyment spoilt by large burnt in subtitles telling us who it belongs to.


Aside from all of these measures that do nothing but spoil the enjoyment of the film for the reviewer, who you are after all hoping will give your film a good review and at least say they enjoy it, and then encourage others to buy it, aside from all that... I don't ever recall ever getting a copy of any DVD that a studio was being cautious about, that wasn't already easily downloadable on the Internet.

So, once again for many big titles we've covered in the past on our website, a pirate could download and give a better more accurate review than we could, thanks ironically to the studios obsession with stopping pirates from getting their films.

But over the last few years, admittedly I thought things were getting better.

Until today, when something dropped through unannounced onto the office doormat. It was a review copy of a DVD with an impressive level of security designed to protect it. First off, they provided an envelope with stamps but no address on, to return the DVD ASAP. Yes, we have to write the address on ourselves, more effort for our over worked team. Not a good start.

The second thing about this package that arrived, is the cardboard sleeve the DVD is in itself. It seems this is some sort of limited run of 20 review disks, sealed with a security strip and a number you can ring if the strip has been removed or broken. Presumably this is because someone in the postal system might break open and copy it, intending to return the disk as if nothing had happened. 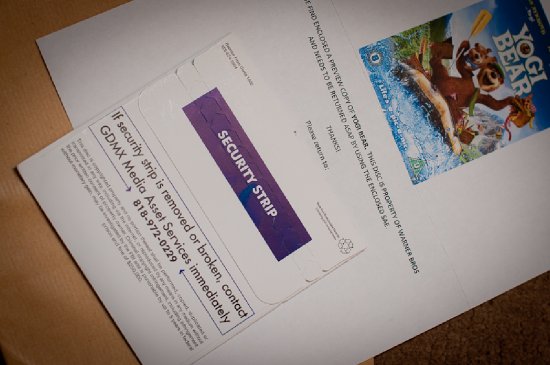 Now, I don't know if these are individually watermarked, or just individually numbered. What I do know, is that for a film as widely panned as Yogi Bear and of which a DVD rip was posted on PirateBay on 2nd March, three months ago, this is nothing more than insanity for a studio to insist upon.

Seriously guys, I don't blame the PR company here they are just following orders. But the people inside your studio who make these decisions, save yourself some money and just get rid of them. They are really not smart, there are plenty of people in this economy you can choose from to replace them who will do a far better job.

Needless to say we'll be sending this disk back right away, and yes I know you are thinking that is an easy moral high ground to take when the film is as widely regarded as Yogi Bear, but we've done it before with much bigger titles and we'll do it again. And we do this because the moment we take that rocky road that ends with reviewing a major motion picture based on a VHS tape we saw in a hotel, we start to lose what our site is all about.

Excellent article, I wonder if anyone will take notice though...
posted by Si Wooldridge on 6/6/2011 16:50
How did I miss this?!! Excellent article - and well overdue. Studios take note!!!
It generally takes about half a day to watch and review a movie. If I was working in PR I would appreciate that I was competing for 'mindshare' (is that the current phrase) and certainly wouldn't put up obstacles for the reviewer. As you say Rob, it is extremely naive that they think a reviewer is going to pirate their precious property. In general, that is has been achieved by someone far less scrupulous months previously. Here's an easy solution...don't send copies out!! I had a disc recently which I wanted to support ... a very marginal release of an old Fritz Lang film from his underwhelming Hollywood period (the boy needed the money). It arrived on a single layer hand scrawled DVD-R. When I put the disc in to view, a 'Property of' caption took up 50% of the screen space!! It went straight in the bin.
posted by Stuart McLean on 19/7/2011 21:40
Hollywood paranoia was one of the reasons I took a sabbatical from writing reviews.  I got fed up of the awful quality of check disks - DVD-Rs of content-only turning up with growing regularity and check disks with security watermarks on them.  Now (if I start reviewing again) I'd only review final product I'd bought myself.