Article
Railways of The World: The 1960's arrives on DVD in February 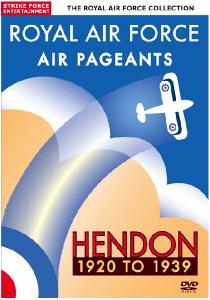 The Royal Air Force's annual Hendon Air Pageants were held during the inter-war years at the now defunct airfield where today's RAF Museum is situated. These air shows were the forerunner of the post-war Farnborough Air Shows and regularly attracted crowds of half a million with over 250 aircraft in the sky.

We have teamed up with the RAF Museum Hendon in support of there amazing Armed Forces Weekend to do an exclusive screening of the DVD on the 25th & 26th June 2011. Armed Forces weekend is dedicated to the brave men and women of all 3 services plus there families and consists of series of activates including concerts of military music underneath the museum's Lancaster, talks, tours and a spitfire fly past which will appear on Saturday 25th June.


SYNOPSIS
The Royal Air Force's annual Hendon Air Pageants were held during the inter-war years at the now defunct airfield where today's RAF Museum is situated. These airshows were the forerunner of the post-war Farnborough Air Shows and regularly attracted crowds of half a million with over 250 aircraft in the sky. The first RAF 'Pageant' was held in 1920. In 1925 it became known as the 'Royal Air Force Display' before, in 1938, being known briefly as the 'Empire Air Day'. John Blake - the 'king' of the Farnborough Air Show commentators narrates us through this compilation of newsreel reports of the Hendon air shows - reports which include aircraft such as the Bristol Fighter, Sopwith Camel, Handley Page 0400 bomber, Snipes, DH-4, Avro 504, the bat-like Pterodactyl, the rare Fairey Fawn, the Armstrong-Whitworth Argosy, Vickers Vimy, Southampton 3, the Inflexible, Bristol Bulldogs, Vickers Virginia, the R-101 giant airship, Hawker Harts, Avro Tutor, DH Tiger Moth, Fairey Battles and many more.

All the surviving promotional 'trailers' for the shows and retrospective news reports on each year's show are included in this definitive chronology with fantastic air-to-air shots from the newsreel cameramen . Every year a great dramatic set-piece at the end of each air show was featured; this could be a huge ship, a fortress, a village or a harbour - targets that were bombed to smithereens by the R.A.F. to the delight of the crowds! Winco 'Dummy' Sandbag regularly leapt out of a barrage balloon just before it disintegrated in a huge ball of fire and, every year, the event was attended by members of the Royal Family including King George V, Queen Mary, Prince Edward and King George VI.

There were also quite a few spectacular crashes - including an Avro Tutor right in front of the crowd!