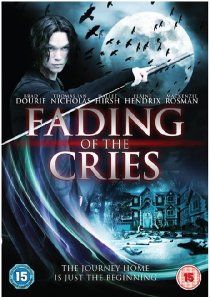 FADING OF THE CRIES

Teenagers, Sarah and Jacob, must work together if they are to survive and make their way home when they are pursued by hordes of monstrous creatures across an incredible fantasy landscape in the new epic adventure FADING OF THE CRIES. Starring Oscar nominated actor Brad Dourif (One Flew Over The Cuckoo's Nest, The Lord of the Rings: The Two Towers, Dune), this thrilling, fast-paced movie is full of amazing special effects and extraordinary creatures and will be available to own on DVD from the 30th May (RRP £12.99)

When a malevolent sorcerer (Brad Dourif) puts a curse on a small town and turns the inhabitants into crazed zombie-like creatures, one girl holds the secret to saving everyone. Teenager, Sarah, is thrown into a waking nightmare when she is attacked by the demons infecting the town. She narrowly escapes when she is rescued by Jacob, a mysterious young man armed with a deadly sword and the skills to use it. Continually pursued, they soon realise that they are each keeping secrets that may be the cause of their plight. Can they work together to undo the evil spell and save those that they love? A fantastical and breath-taking adventure, that is full of horror, romance and action. FADING OF THE CRIES tells a chilling story on a grand scale!

FADING OF THE CRIES
Cast & Crew: