DVD
Withnail And I (UK) 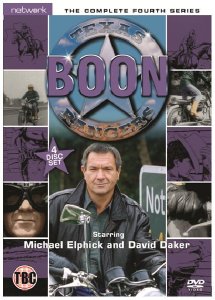 On 23rd May 2011, Network will release the eagerly anticipated BOON - THE COMPLETE FOURTH SERIES (12). This 4 - disc set includes all episodes from Series Four, complete and uncut, RRP £39.99.

Ken Boon is back in the saddle for more adventure and humour in this fourth series of the BAFTA-winning hit drama. Michael Elphick is Ken, the former fireman with a heart of gold and David Daker is Harry, his over-ambitious business partner.

The fourth series finds the two moving to Nottingham, where Ken, having handed the running of his motorbike despatch firm over to Rocky (Neil Morrissey - Men Behaving Badly), continues to make a living as a private investigator and minder; still full of big ideas, Harry seeks out more new business ventures with widow Helen (Brigit Forsyth - The Likely Lads).