The Be All and End All hits DVD in April 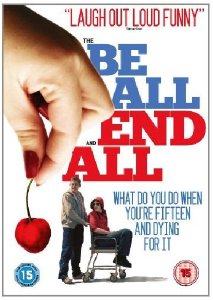 THE BE ALL AND END ALL

AVAILABLE ON DVD FROM 11 APRIL

'It is hard to criticise this perfectly likeable low budget flick ***'
Grant Rollings, THE SUN

'The honest performances win you over' ***
Tim Robey, THE TELEGRAPH

'This is a movie with a big heart'
Peter Bradshaw, THE GUARDIAN

Robbie (Josh Bolt) and Ziggy (Eugene Byrne) think they'll be best mates forever, but when Robbie collapses on holiday and is diagnosed with a fatal heart condition, forever suddenly seems a lot shorter. Lying in the children's ward, Robbie only has one thing on his mind: he doesn't want to die a virgin - and the only one who can help him achieve his goal is his best friend Ziggy. A truly hilarious and heartfelt British film, The Be All And End All will be available on DVD from 11th April.

Hopelessly inexperienced with the opposite sex himself, Ziggy is put in charge with the almighty task of getting his dying friend laid and devises a number of flawed plans which lead to him getting beaten up by the outraged girls at school, followed by a mistimed trip to a brothel just as it gets raided by the police.

Both newcomers when they were cast, the performances by young Liverpudlian actors Josh Bold and Eugene Byrne are spontaneous and charmingly rough around the edges, making The Be All and End All that rare thing; a British film that is frank, unsentimental and often downright funny.