Article
William & Kate: The Movie comes to DVD in April 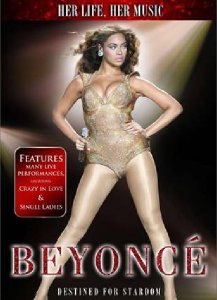 RELEASED ON DVD 25 APRIL 2011
The award winning singer, actress, and dancer has made the world sit back and take notice. Beyoncé Giselle Knowles overcame shyness from her humble beginnings in Texas to transform herself into the music mogul simply known as Beyoncé.

Early in her teens she formed Destiny's Child. Interviews with Beyoncé, Kelly Rowland, and Michelle Williams illustrate the group's early beginnings, accolades, and internal conflicts which ultimately led to platinum status. After the split in 2005, Beyoncé achieved greater success as a solo artist. With over 120 million records sold; nine top charting hits; 16 Grammys; and countless other music awards...she started her own fashion line, beauty school, and starred in several feature films including Dreamgirls and Austin Powers: Goldmember in her spare time. The DVD includes the songs Crazy In Love, Single Ladies, Irreplaceable and If I Were A Boy along with hits from Destiny's Child.

Beyoncé: Destined for Stardom… explores her destined rise to stardom from her first public performance in the hit TV series Star Search through to her emotional show stopping performance at the Inauguration of President Obama. Packed with interviews from Destiny's Child, A-List celebrities, and musical performances from around the world the programme is an absolute "must have" for any collection.With passion and hard work, Beyoncé continues to reach new heights to the delight of her many fans around the world.